I tried to use aqualung gear for the first time in my life in July 2001 in Magaluf in Mallorca. 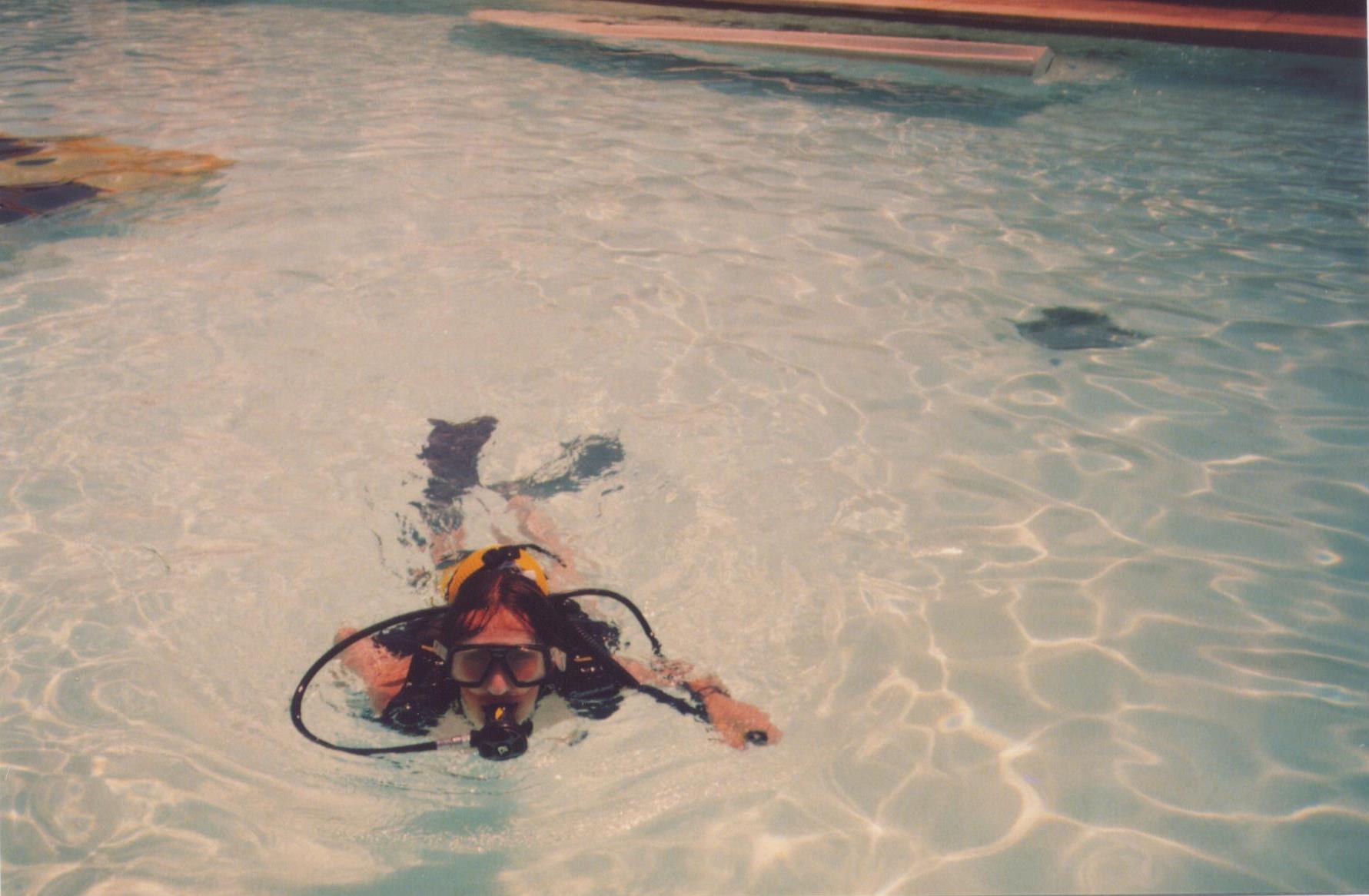 Western Park, aquapark in Magaluf offered that opportunity. It was my dream since I remember. I liked to watch movies from underwater in TV every time possible. I liked also to read books about technical issues or history of scuba diving. But it was not obvious that I just tried this experience. 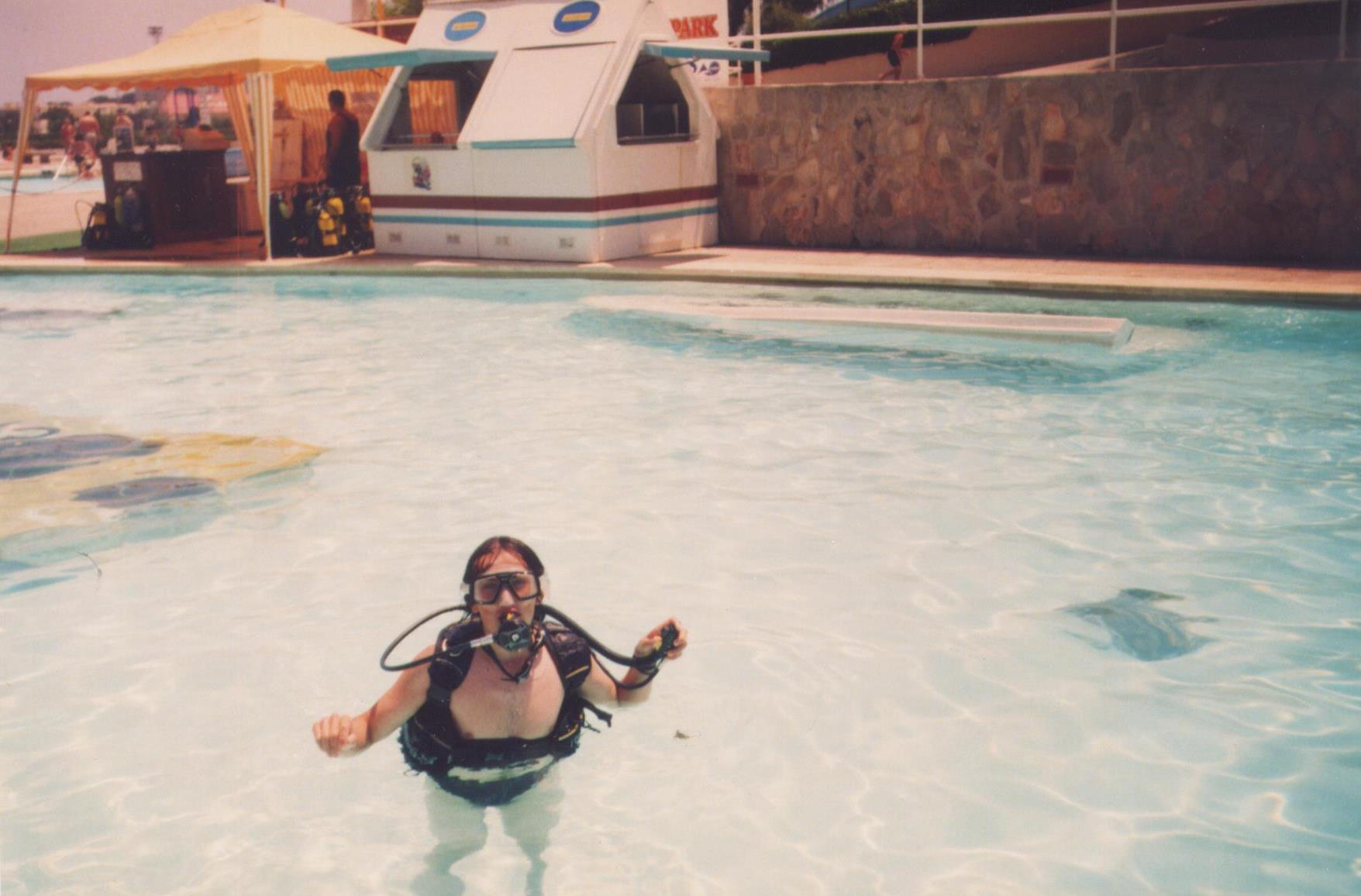 My parents were reluctant to that I enjoyed this. My father may have really bad memory. When I was about 11 or something like that we once walked to Buksa pond in Ryki. He was just after his work. It was summer, very hot outside. I liked diving since I remember so I hide away for a while underwater. And I will remember this view till the end of my life. My father just jumped after me to the water in his casual suit. It was scary for me. I did not know what happened when he dragged me from underwater. And it scared me twice as much because no matter that during military service after studies he was forced to have a short military service also at sea. He was in service on a military boat like that I was diving as being on a wreck in Hel at the cross of Zatoka Pucka and Baltic Sea. The upper part of it is located at about 14 meters or more and the lowest part at more than 20. It was the most basic patrol boat in the service of Polish marine military troops during communism times. And he was an officer in military that time in marine service and he did not know how to swim and I think he finally never learned it. As I knew it so I was really scared what he did. Maybe one year after that I did a swimmer’s certificate

that in post-communist country like Poland it was obligatory that time.

I do not know finally how I persuaded my parents but my sister was with me in Magaluf and she watched that I have real fun with this and that I understand far more about it than her and finally I signed up for Discover Scuba Diving half a day program in Big Blue scuba diving center in Palmanova. And I succeeded in it. I not only experienced just to discover it but I wanted to try again same day and to go on a boat trip and my divemaster, quite young man accepted it. So I got Discover Scuba Diving and one just regular diving as if I was after OWD course or during that. And after that I had to wait 3 years more to participate in full OWD program in Gdańsk and I returned to Mallorca after only 4 years with my own car. I got to Mallorca from Valencia in Spain. 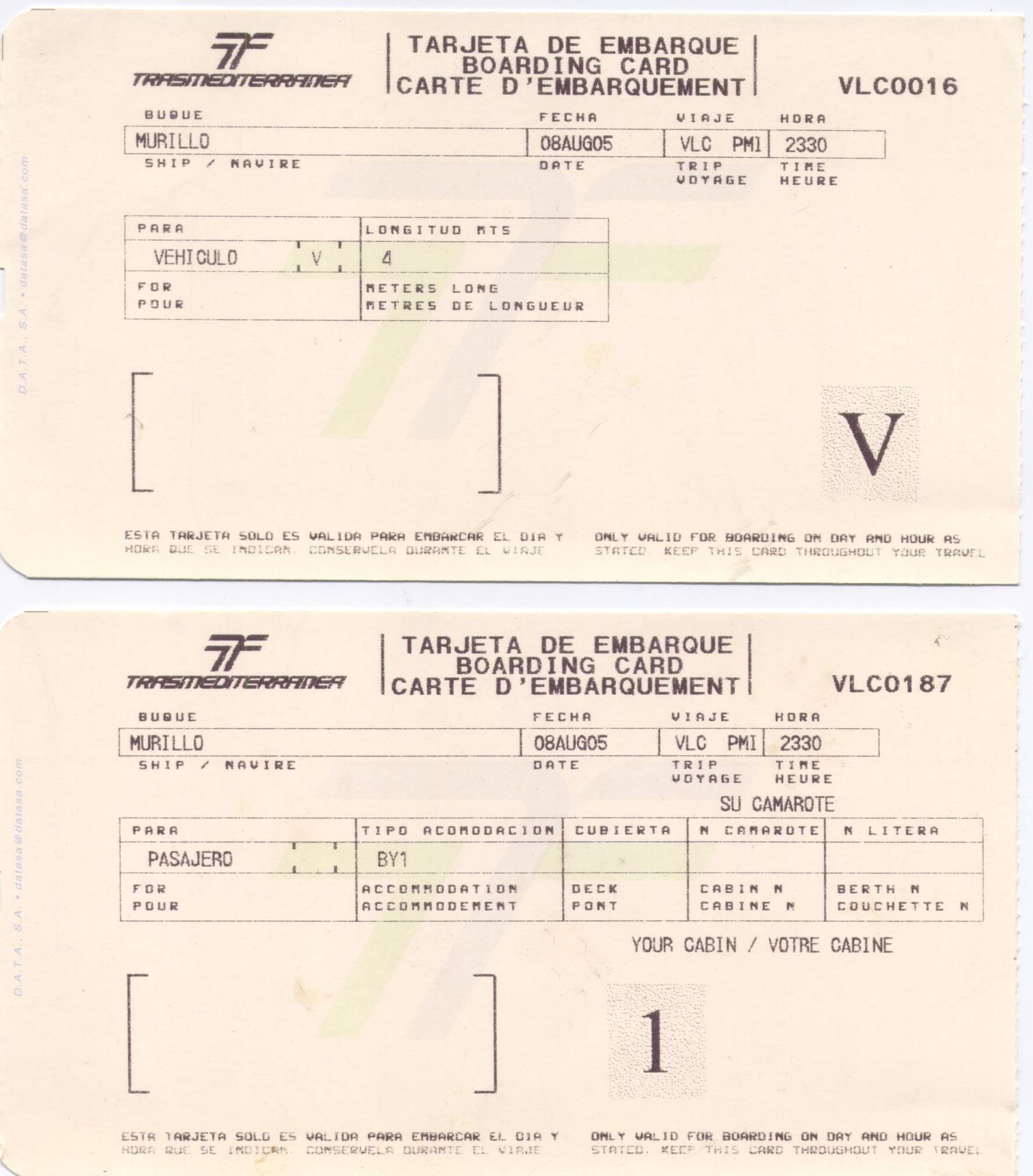 A photo below was taken by my ex girlfriend Monika in Solina. I liked very much my first wetsuit in my life bought in Mallorca. I realized then how good it is to be well dressed to encounter water the way I never did before. Wetsuit and neoprene that it is made of gives you an opportunity to increase your positive buoyancy so the risk that you sink even by accident decreases significantly. I think to start with any water sports you simply need to start to use wetsuits of many kinds no matter what you try, how long you think you will stay in the water. Open waters are not aquaparks and you can sink even in aquapark. Unless you are not a qualified swimmer, diver, surfer, do not have experiences from life and training how to behave in emergency situations of many kinds it is necessary to wear wetsuit or PFDs (ang. personal flotation devices) like life jackets that you will find even in airplanes. 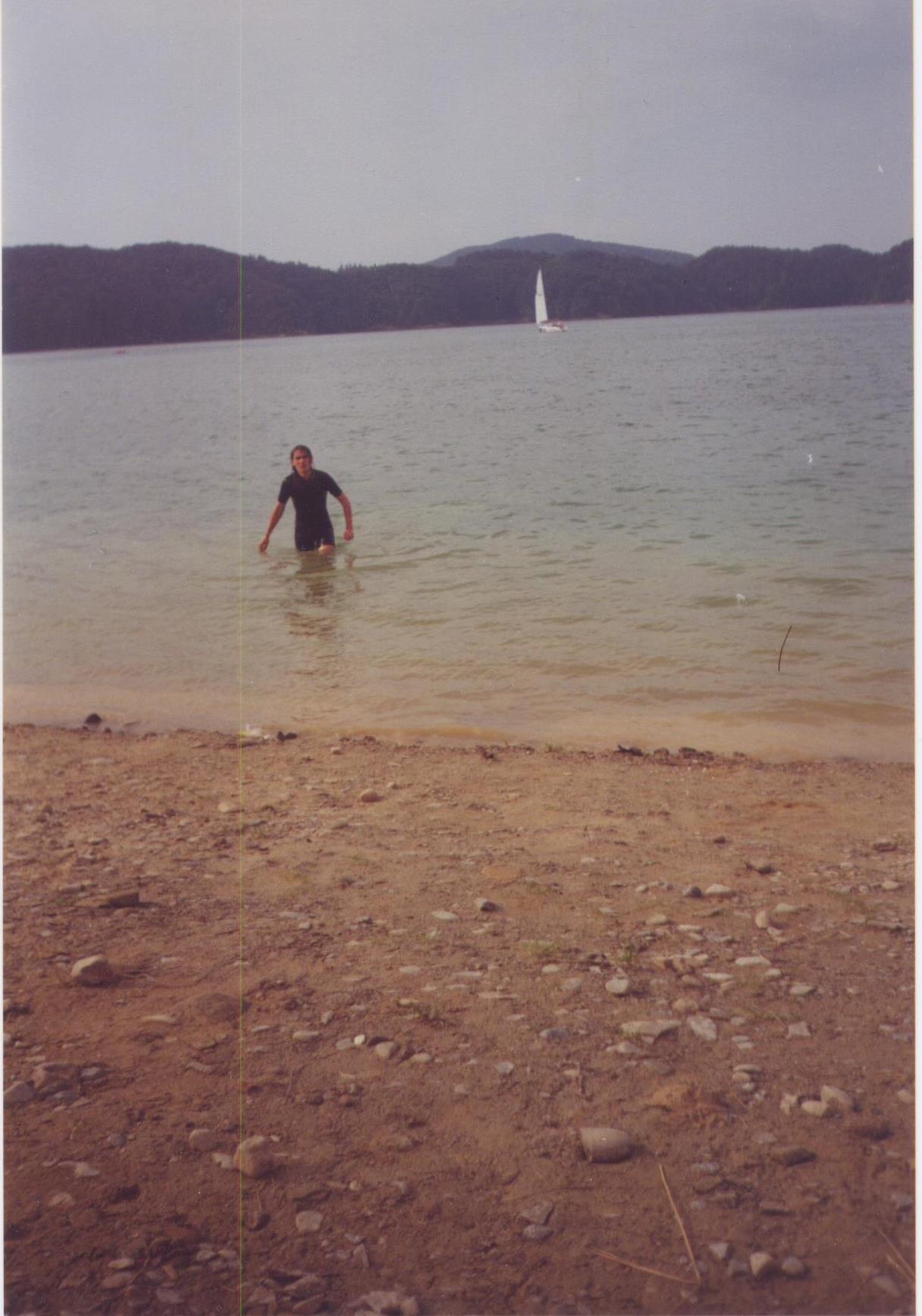 In summer 2003 in Olecko I did the longest distance in swimming for the first and the last time just to check my skills before doing a first scuba diving course that I planned for a year after. I was swimming for about one hour or longer and did about 2 km of the distance. So I made water my element but it did not happen in any specific moment. I felt comfortable with open waters or in swimming pool in Puławy we traveled with my father, Jacek and Agnieszka when I was very young and them we traveled quite often. But hard to say when it happened that I started to feel like a seal in water. It just happened but as the result of a process I think. And I see in many cases life in terms of processes. 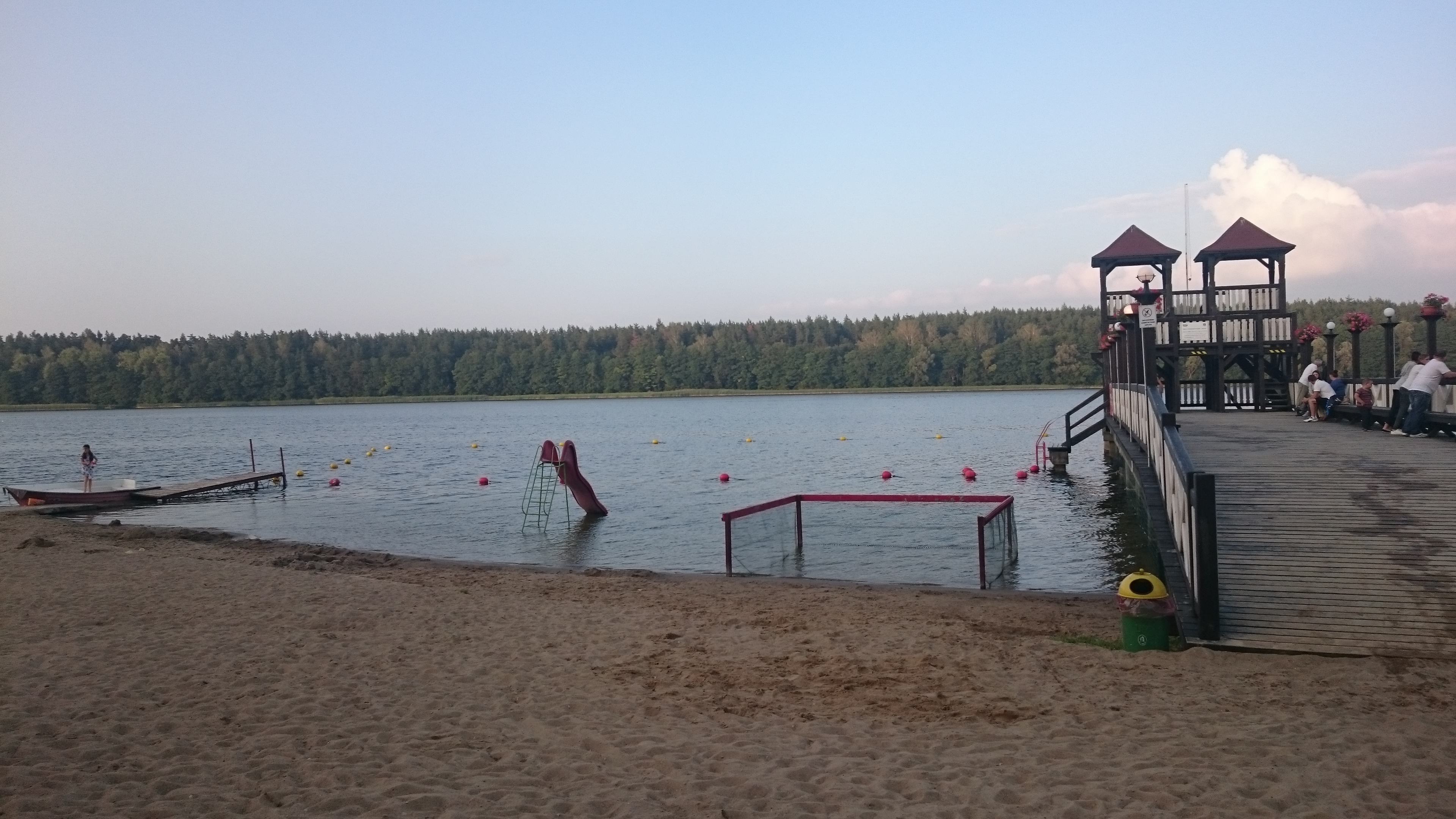 When I compare that process with my attitude to new experiences in water now it is simply not comparable. For example I did not dive for maybe 8 years! Between 2010 and 2017. But other thing I crossed Atlantic ocean twice, in 2010 and 2012 and two different ways. One took me up to 2 weeks and was through Greenland. So I cannot say I did not face water element at all in that period. But scuba diving was something neglected by me that time. And maybe due to real traumatic experiences. I had shivers. I had cold even after diving in autumn 2017 in scuba diver’s tower. And one or two nights after I had just emotional hyper-arousal and extraordinary response even during sleep to that experience. But it was a result of something I had to reanalyze, re-experience and realized that I never exposed myself to danger. I never made a serious mistake underwater. I am sensitive observer underwater. I was many times even struck by a fin of someone else and almost being pulled my regulator from my mouth by accident when being relatively deep. But never experienced serious panic attack even when being seriously surprised. What happened to my self confidence as a diver about 2009 was something I had to discuss many times with people more experienced than me. To close this experience but also with important conclusions to my reflex, habits and standards I comply with underwater. And some lymbic system response has been silenced gradually by new experiences, with professionals, by challenging my limits known before and I rewrote and rewired my brain by simply tricking it with multiple new experiences of new level kind.