I do not support piracy in software use. All programs in my studio are legal. Purchased in box or bought via Internet. 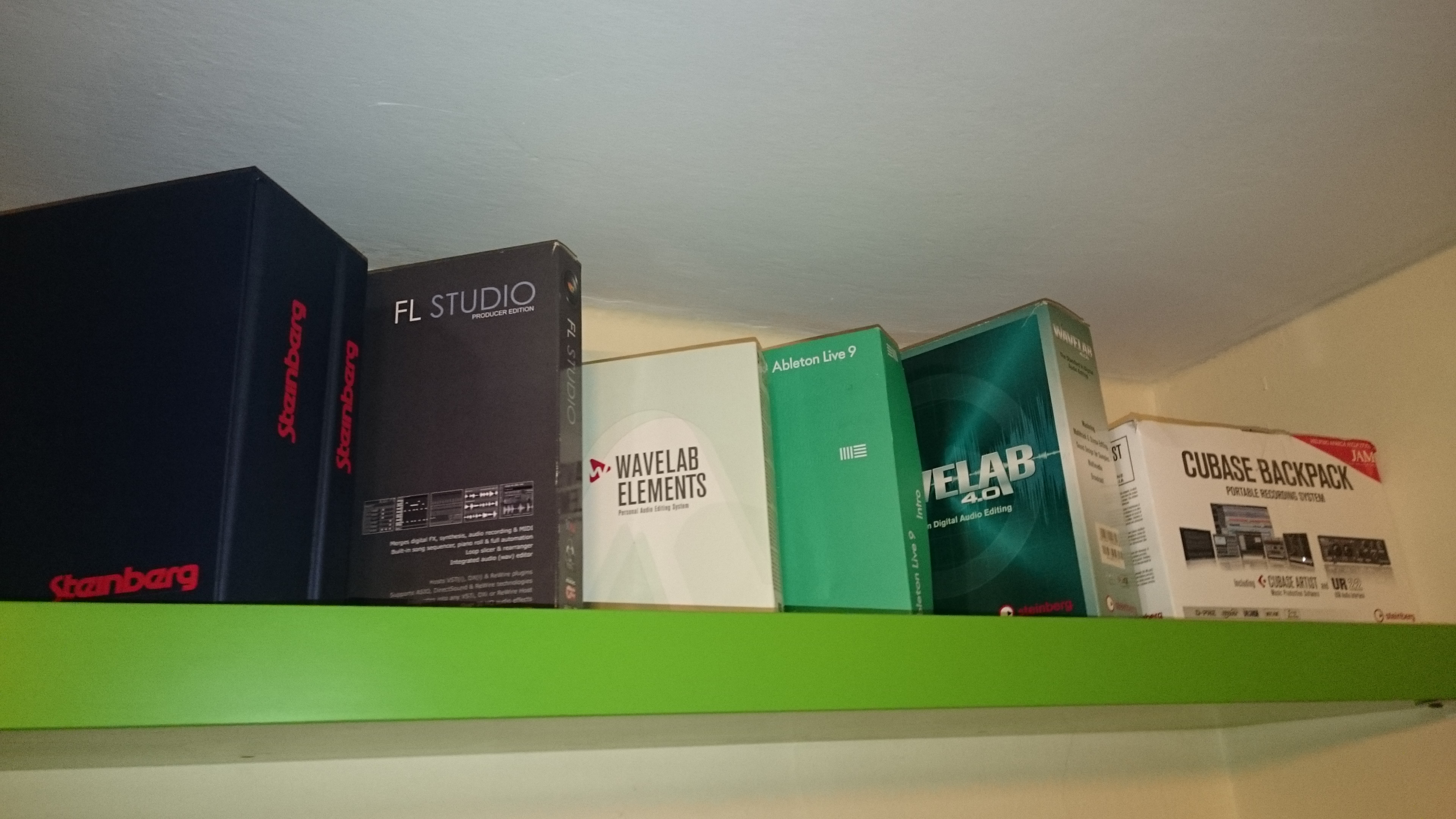 For me this is one of the most important topics to describe. It used to be so many programs I used and so many habits and comforts of using this so I will try to explain it.

I started my adventure with music recording from sound card Sound Blaster Live! And programs that were offered in the package. Some time after that I became a fan of Sound Blaster Audigy and started to develop interest in audio computer interfaces. My first interface after beloved Sound Blaster Audigy that was released with Cubase VST program much liked by me was Mbox audio interface based on very simple version of Pro Tools. The year 2003 was for me a great period I liked to travel to the coast of Poland in Darłówko by train with my laptop and Mbox digital recording system and good microphone of AKG brand like C1000 and was recording voices of birds and noise of waves of the sea. What I liked the most. I liked to experiment with sounds and I was often a visitor to Telewizja Polska sitting at the back of directing Jaka to Melodia program or talking with technical staff. I was once arranged a meeting with whole director of sound engineering staff what impressed me. Mr. Niżewski has spent with me much time. And eg. encouraged me to buy yearly issue of Sound on Sound magazine. What I did after that. We discussed problems of recording techniques using microphones, challenges like how to record bass guitar and other endless topics we realized that share similarly deep interest in. During that period I was buying many magazines from abroad like Electronic Musician, Future Music, Computer Music etc. But also Polish Muzyk, Estrada i Studio or even… Ultra Szmata edited by Z. Hołdys. Weirdest magazine ever collected.

During my sound engineering course I was taught so much like never in my life before and never after. And was never after so high about gaining so much technical knowledge and nuances about aesthetics in wide spectrum of recording music problems. And it will be hard to describe clearly how much insights I gained and what I have really learned but separate threads will cover details. The fact about soft from that part of my education is that I became familiar with all programs and systems I did not have and generally it was Logic, but also Cakewalk in NewProject Production studio in Wołomin. In Izabelin Studio I was taught how to record music in Pro Tools. I liked there echo-less chamber! I work on the space like this in my haunted house. And something like in 2002 I bought my first audio recording program with full license what was Cubase SX that I used till 2013!! Wave Lab 4.0 (my favorite version ever – program has cost me about 2000 PLN then! For ordinary people totally hard to understand investment in the world of software piracy etc. I was using Wave Lab 4.0 for mastering and audio editing in terms of single audio files or to see some problems with panorama, with harmonics, single frequencies editing, spectrum analysis, phase correlation important during mixing and mastering, normalization algorithms, DC offset removal and many other tasks using also VST plugins. I use this program till today due to genius algorithms for audio processing implemented as early as then. Years 2002 and 2003 were of those most revolutionary ones in terms of fast growth of digital audio editing software and digital audio devices sector development in audio recording industry and the greatest competition in the history of this then new filed ever. I used also some plugins like PSP delays implemented from Lexicon legendary devices. I used also some built-in plugins from Cubase and Wave Lab package. Cubase SX and Wave Lab perfectly complemented each other and were enough for me for almost 10 years. The year 2003 or 2004 brought to my studio MOTU 2408 multitrack digital recording system that 8 tracks from my mixing console Mackie 24*8*2 are connected to it all the time. But the system allows to provide capacity for 24 inputs signals simultaneously. A very loved system by me. The year 2013 brought to my life another stage of new investments that I changed software that is quite expensive, I bought new studio AKAI monitors, I invested also in new digital audio interface like before Mbox that I used about the year 2003 so now I bought Steinberg UR22 that I do not use too often but professionally supplement all my systems that I cannot use even single amateur solution. I was developing my studio since 2002 from scratch, invented it in my head, all pieces came from my head and always fit together because I always knew almost everything what was possible, everything what was simply available and I knew almost all brands from that industry and now world of sound engineering does not impress me much. And this is why boredom discourages me from being too absorbed by something that is a bit exploited thread in my life from intellectual point of view. I think I like what’s always intellectually challenging. During creation of my studio I fulfilled my own ideas and schemes, I used knowledge from numerous English and Polish books from acoustics to digital recording, microphone techniques, audio processing and even repairs of audio devices. So I am not and I was never an amateur. You can imagine that all my cables in my studio – it may be more than 200 single cables – I did by me using Neutrick connectors and PROEL or CORDIAL raw cables and soldered them all exclusively on my own during nights within period something like between years 2002 and 2003! I do not remember when I was really sleeping then. Probably I did not sleep too much when I try to analyze it. And maybe highly productive years from 2002 to something like 2010 that in 2010 I was almost double major and not in music or sound engineering at all so achieved completely auxiliary goals to my life in general that for some people are simply professional or even life goals themselves! Maybe this was a reason of my exhaust, burn out and kind of coma for several years after. My head could explode due to how much I wanted to do in my life in relatively short period of my life. Without venting my emotions too much. And I traveled a lot that time too. I was getting up often late to school. And I moved from Puławy to Ryki to Secondary School also due to devastating my resources for other duties passion. I was often failing ordinary tasks in Secondary School and I was sometimes unbelievably from today’s point of view graded as under average participant of that miserable public education system. Then I moved to Cubase 7.5 I invested in in the year 2013 and use with a license for home recording and artists till today.

In August 2010 my dreams were so bit. I was in Los Angeles in Guitar Center, Sunset Blvd 7402 and found what was missing to me. Used Mackie HUI control. Company of my father was sinking so I took him to Las Vegas to see people who lose everything every day and still are alive. I was not sure about my future. Spending too much was not a good idea for me. I wasn’t financially successful too much in my life in anything. But I bought it and brought to Poland.

Now I use Wave Lab Elements 8 but this is not the same tool as Wave Lab 4.0. I am not a big fan of novelties. Because like Enya was singing Only time can show what our true love is. And this is also with what we will say after years. Oh God, this was a program! I have about 10 laptops. And on one of them I have installed Windows 98 to have still fun of some computer games and programs! And I will always do. This is like an oil lamp for some of our older cousins. Probably still somewhere. I know places in Poland where electricity got there in 70s.

Today on computers that are not for recording music (I spend a lot of time not in studio) purposes I use free license programs like Audacity and this is completely enough for me. And I use generally hundreds of little computer programs that are sometimes hard to classify to what field of life it refers. I am a bit complex about use of software in general. So you will never see me with T-Shirt that I am Apple user or I do not use smartwatch from Apple. Because this is simply boring useless stuff for kids to me.

I like 8-bit music trackers however are a boring too late passion for me. If I was given such opportunities or to say software possibilities in Primary School I would spend so much time on it that hope that I would be just another Adam Gilmore. Now it is kind of sentiment for me.

About the year 2014 I was learning in Akademia Dźwięku how to use Ableton Live. Program is just interesting. I chose to learn it from course because it was a bit counter-intuitive and abstract for people from my generation who gone through really many of them and multiple versions of each. And what can I say? It is no good program. Is too concise and limits electronic music creation to thousands of samples and combinations of tempo and many aspects of it but this is not the point. Music cannot be limited. This program due to being overly abstract limits some musical ideas and limits creativity within them from my point of view. And as a few tricks impressed me how easy is to do really apparently complex right in tempo songs this is still poor tool for recording music! I like to launch any other sequencers, even from synthesizer or even I play drums from keys on synthesizer like now Korg Kronos! I have a very good sense of rhythm and I prefer to do this more than to get screwed into programs of the kind of Ableton. For me it is not innovative. It is kind of sh.. I want to apologize especially programmers. But this is just my taste. I will never forget when I was recording something about 2003 a band Rhinoceros from Dęblin and their bass player was playing bass so uneven that I had to cut his best performance into 127 pieces and snap all of them to what I was hearing as a rhythm! I did thousands of little things like this that contributed to my proficiency in many things but I never devoted myself and committed myself to make boredom my way through life! Ooo!

I listened to one song and was precisely clicking to the rhythm and realized how precise is this little app. Click and shout! I am not sure about my highest frequency of my mouse clicking but I think no matter that has also limits I can have record performances as well.